The Climatarian Challenge App is Available! 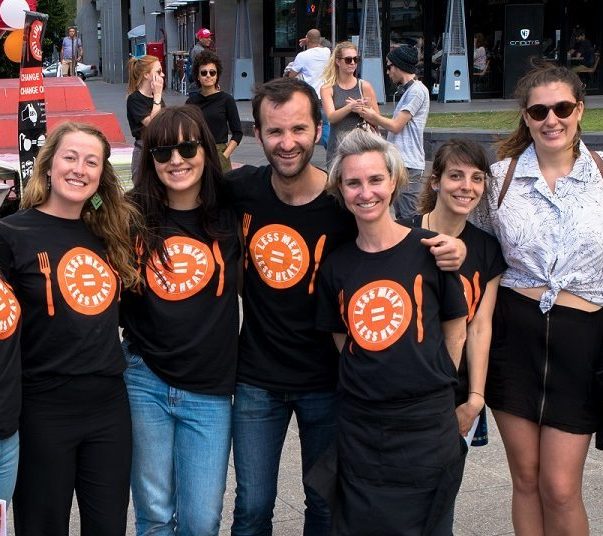 The Climatarian Challenge App is Available!

Queensbridge Square, Saturday, November 12 was just a typical day in Melbourne’s waterfront hub, bustling with tourists, joggers, cyclists… and a breakdancing cow? That’s right, a few weekends ago Queensbridge Square was the climate-friendly place-to-be as the LMLH crew was out and about to celebrate the official launch of The Climatarian Challenge App.

Casual wanderers, families, environmentally conscious folk, and foodies alike were drawn to the event by the mouth-watering smell of the various low-carbon food choices. Where else could you eat an emu burger from GrumbleTumms followed by a decadent dessert from Von’s Vegan Bakehouse? The bike-drawn Good Brew Kombucha, Cornutopia’s sustainable Mexican offerings, Vagabond’s top-notch coffee, and Popstic’s dairy-free icecream satisfied every appetite while the generous vendors donated a portion of their proceeds to LMLH.

If it wasn’t the food that brought attendees to the LMLH tent, it was the musical talent of Aiden, one of the members of the New Zealand band, Planet A. His catchy (and appropriately named) “Less Meat, Less Heat” is sure to become a big hit among environmentalists. A discussion of methane, cow farts and burps was incorporated into the unforgettable chorus (really, I still catch myself humming it). When accompanied by a rhythmically-talented, cowsuit-donned volunteer, the crowd was pleasantly entertained and informed.

The day was just as fun for volunteers as it was for attendees. With bellies full and surrounded by music and laughter, the LMLH team was able to chat with the general public, informing them of the detrimental impacts on our climate that result from high levels of meat consumption, particularly that of beef and lamb. Upon viewing CEO Mark’s TEDxTalk, individuals were both surprised and intrigued at the role they could play in helping to fight against climate change.

Overall, aside from a characteristically windy Melbourne day that prevented our cooking demo (stay tuned for the next one!), the launch event was a huge success! The fun-filled day drew a diverse crowd of old and young people, Melbournians and international visitors, vegans, vegetarians, carnivores, and even a cattle farmer. We were able to sell $220 of LMLH merchandise and we had 42 people were given Lord of the Fries vouchers when they downloaded the Climatarian Challenge App. But the event was just the cowtalyst, thanks to followers and supporters like you, we’ve now had almost 2,000 app sign-ups in just two weeks!