The Benefits of Counting Cow Burps in the Climate Debate 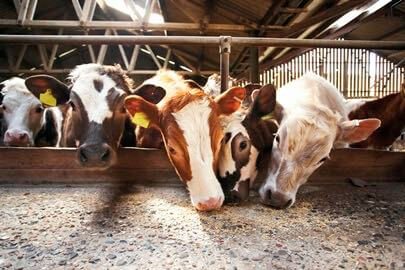 A collaborative study by Beyond Zero Emissions and University of Melbourne warns of the danger of ignoring short-term gases not only in greenhouse gas accounting, but also in climate change mitigation efforts and policy. Short-term gases or short-lived climate forcers (pollutants) are gases that persist in the atmosphere for a short period of time, but may have a far more lethal effect on the climate, warn the authors of the study. For instance, methane has an atmospheric life of 12 years but has a stronger impact on the climate than carbon dioxide (CO2) does during its lifetime.
The study points out that the current accounting framework for a nation’s emissions inventory, based on the UN Framework Convention on Climate Change (UNFCCC), focusses only on long-lived gases such as CO2, which can exist in the atmosphere for hundreds of years. Individual rates at which countries cut CO2 emissions have been the hot topic at climate negotiations for over 20 years. At the upcoming COP21 in Paris, France, world leaders hope to create a global agreement of reducing carbon emissions made up of voluntary emission cut rates from parties, among other things.
With the notable exception of emissions that disrupt stratospheric ozone, government action and global debate has proceeded in a CO2-centric fashion, even though shorter lived gases (including methane) have been responsible for 39% of net anthropogenic warming globally since 1750, and 20 year warming from yearly Australian non-CO2 greenhouse gases is twice that of yearly CO2.

The Kyoto Protocol and other UNFCCC agreements have established a 100-year Global Warming Potential as a metric to measure the ‘heat’ of different gases found in the atmosphere. This 100-year period was randomly chosen and has now become part of the system of deciding what gas is most dangerous to the climate, obscuring emissions reporting claims the study.
The researchers sought to prove that omitting agricultural emissions from the accounting framework due to their short lifespan underestimates a country’s pollutant reporting and is a blind spot. We run the , risk of reacting too late to climate change. Methane emissions of ruminant livestock production such as cows and sheep pose one of the most significant risks, and it is presumed that demand for livestock production will ‘continue rising as a result of growing global population and the Westernisation of diets.’
Accounting for these emissions is the first step to transformational mitigation action because ‘a focus on short term emissions will have a quick payoff’, they say. Rapid cuts to ruminant livestock pose a transformative opportunity to mitigate the effects of climate change and boost other mitigation efforts. Consumers reducing their ‘meat consumption resonates with other environmental and health concerns’, but producers will require support to achieve the significant level of adaptation required.
The research does not attempt to claim that reducing carbon emissions is not important. Their argument is that since carbon emissions are counted over 100 years, mitigation action happens over a long term as well. While concentrations of short-lived climate forcers, such as methane, rise unabated. Methane ‘has increased in atmospheric concentration by 260% since 1750, compared to the 40% increase in CO2 (Blasing 2013)’ and mitigating these short-term gases would provide climate solutions that deliver results over a shorter period of time. This will bolster and revitalise long-term climate change mitigation actions, such as those aiming to reduce CO2 in the atmosphere, as well.

Essentially, the study concludes, if we could have a rethink about the amount of red meat consumed in Australia (because we know that producing beef and lamb also produces methane), we might will be able to act faster and more effectively to prevent climate change effects (such as droughts, floods and erratic weather). A ruminant animal’s digestive system is hardwired in a way as to produce methane through something called ‘ruminant enteric fermentation’ i.e. cow burps. Additionally, savannah burning to clear land to raise livestock produces carbon dioxide and carbon monoxide.
Understanding that livestock emissions make up half of Australia’s national global warming impact over 20 years, and that 93% of this comes from ruminant production, gives strong cause for an urgent, robust debate on red meat production.
The study by Gerard Wedderburn-Bisshop, researcher for Beyond Zero Emissions’ Land Use Plan,; Andrew Longmire, director of the Land Use Plan, and Dr Lauren Rickards, Research Fellow at the Melbourne Sustainable Society Institute, University of Melbourne, was published in the peer-reviewed International Journal of Climate Change: Impacts and Response.