How COP23 Gave Birth to PCOP 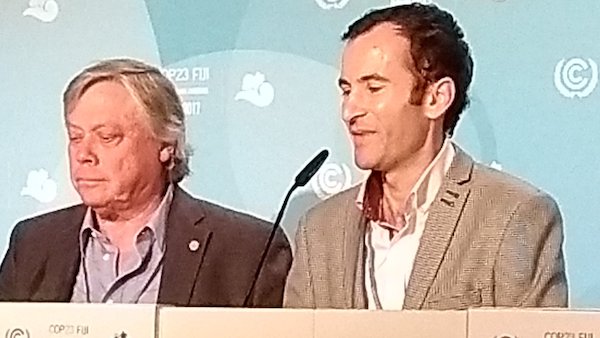 How COP23 Gave Birth to PCOP

It’s the founder and CEO Mark Pershin here and I’m here to share with you the story of our experience attending the 23rd Conference of Parties (COP23) to the United Nations Framework Convention on Climate Change (UNFCCC), which is basically our ongoing negotiation process for creating and implementing a global treaty that addresses two areas of concern: to reduce further temperature rise and as many climate change impacts as possible (mitigation); and to work together to deal with the realities of the climate we have already changed (adaptation).

I’ll be honest with you. I wasn’t actually planning to go to COP23 after learning how much of a climate change cop-out the whole process was back in late 2015 in Paris when I ‘popped my COP cherry’ with the historic COP21. Those two long weeks in Paris took their emotional toll on me personally, largely due to the injustice of it all. The poorest of the world, who have historically contributed little to the problem but have been hit the hardest by the impacts of climate change, have been asked to ‘develop in a clean way’ by the countries who have contributed the most to the rise in greenhouse gases, while being given grossly insufficient funds for such ‘clean development’ or the damages inflicted upon them by climate change. I likened it to giving a homeless person a 5 cent coin and asking them to buy a suit with it and get a job. I found the lack of basic human empathy veiled in technical jargon to be disgraceful. Yet, here I am again.

As a member of Climate Action Network (CAN) we were offered a ticket and, since I was already in the UK helping build our volunteer base there, I figured it was only a hop skip and a jump across to Bonn in Germany, a far more affordable and less carbon-intensive affair than the arduous red-eye-inducing journey from my hometown of Melbourne. So I figured I’d give it a second chance and see if we could be more targeted with our approach this time and enact some real change in these negotiation processes. Furthermore, one of the most redeeming aspects of these talks are the opportunities to connect with other inspiring and passionate people from around the world to share ideas, strategies and opportunities for collaboration over pints of Kölsch and hard-to-find climatarian fare. On this occasion, just through sheer luck, we were offered another ticket so I was able to invite along fellow LMLH volunteer, Alice Vodden, along for the ride. 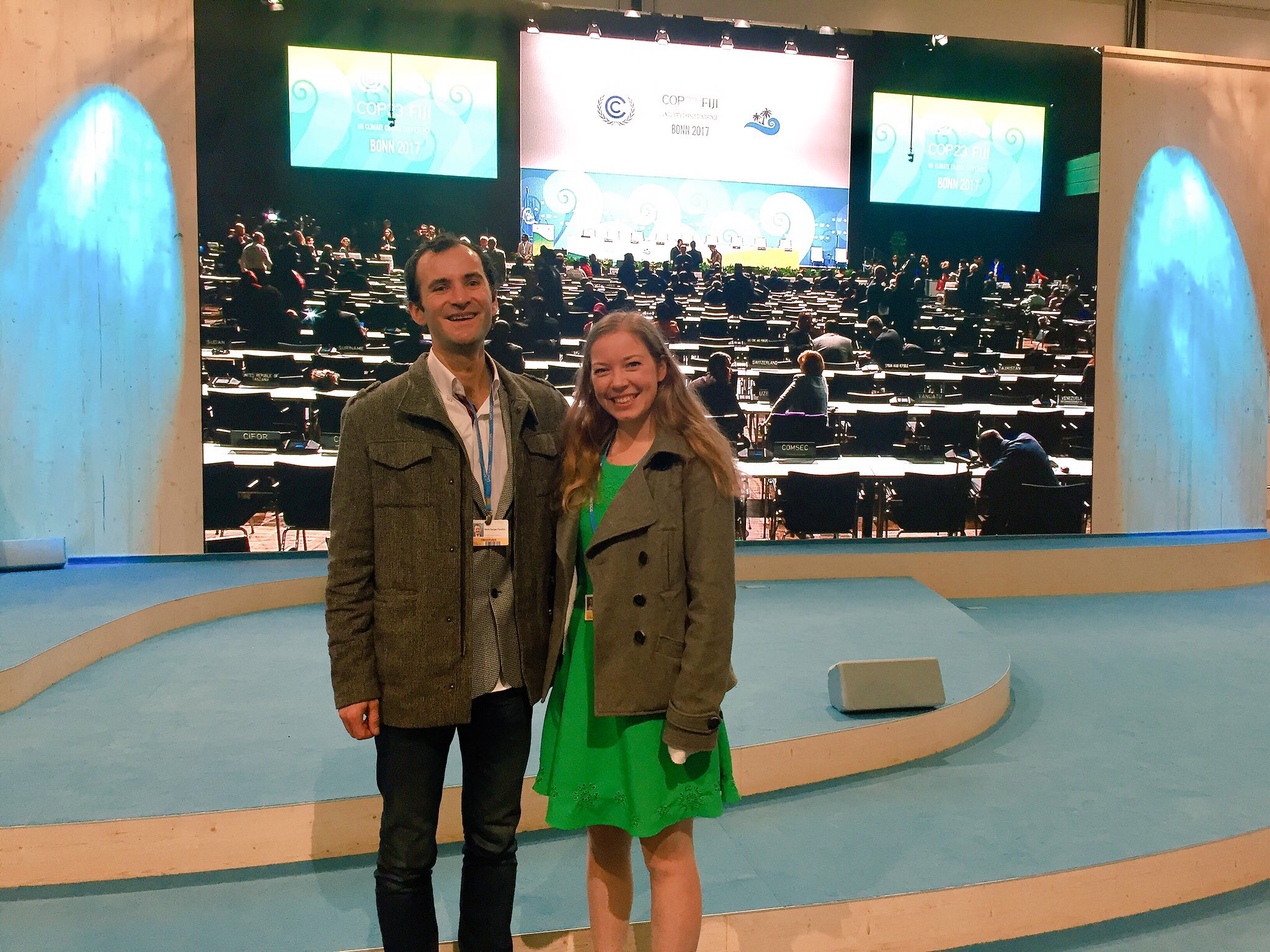 Before I dive into the key outcomes of our work at the conference I’d like to acknowledge the weeks, if not months, of preparatory work by our wonderful volunteers Oxana Lopatina, Leander Brister, Kerry Raybone, George Parsons, Daisy Durden and Ben Ako as well as Jodie Green and Alastair Leith (who I knew originally from Beyond Zero Emissions), Biba Hartigan from Climates Network, Helen Harwatt and finally David Zwolski and Michael Kubler for getting our website up to scratch and ready to handle large volumes of traffic in preparation for any media exposure we anticipated from our appearance there. We could not have achieved anything without all of their hard work, which is the behind-the-scenes and what you didn’t see on our Twitter feed during the conference. Thank you!

Going into these talks this time I wanted a tangible and measurable outcome, rather than simply rallying for the effects of agriculture and overconsumption of meat by the global middle and upper classes to be put on the table for discussion. Hence, we went back to the drawing board and tried to answer the fundamental question, ‘Why is agriculture not seen as both the massive threat to climate change and simultaneously the massive opportunity for dealing with it that it actually represents. We recalled the work of Gerard Wedderburb-Bisshop, Lauren Rickards and Andrew Longmire in Neglected Transformational Response, the ground-breaking research paper that showed how livestock agriculture actually accounts for over half of Australia’s greenhouse gas emissions rather than the 15% that the sector is officially given credit for, and so the answer became simple: measurement. Under the current UNFCCC greenhouse gas measurement framework, all greenhouse gases are measured in terms of how much they warm the atmosphere (or more accurately, retain the heat of the sun in the atmosphere) over a 100-year time frame. This means that the largest emission from the agriculture sector (methane) which only lasts in the atmosphere for 10 years, is grossly underestimated in terms of its impact on our climate during those first 10 years, since we average it out over 100 years (check out this slideshow I put together for additional clarification).

Secondly, livestock agriculture is responsible for over 80% of global deforestation (move over palm oil) yet under the current greenhouse gas measurement methodology, none of these emissions are attributed to the agricultural sector. There is also the issue of black carbon, largely driven by the livestock agricultural sector and responsible for 15% of current warming, yet also excluded from official greenhouse gas accounting. Since we had limited time and limited resources we decided we could only focus on one of these factors if we were to get any real traction during the conference so we picked the first one – improving the accuracy of how we measure the impact of various greenhouse gases. Doing this, we can better manage them.

By the first day at the conference we already had a policy brief prepared, now we needed a way to get it on the table for negotiation. The climate talks that followed COP21 and all the way up to COP24 in Poland late 2018 are focused on creating the ‘rule-book’ that will determine how we will implement the Paris Agreement. Check out this great explainer from Carbon Brief for more information.  Hence we needed to pitch this policy to the various country delegations (or ‘parties’ as the UN calls them’) so they could do that for us. We figured it was not enough to just hand them the policy document, we needed to build a coalition of environmental NGOs and scientists in support of this policy to add weight and legitimacy to the proposal. Hence this is how the Put Climate on Pause (PCOP) Coalition was born.

Alice and I were joined by UK Youth Climate Coalition (UKYCC) campaigner Naomi Kreitman in building the coalition in the first week of the talks to launch it officially in the second week of the talks.  Through our personal networks we managed to rapidly build a coalition of 4 renowned scientists (some of which had previously worked on IPCC reports) as well as 12 member organisations, including big names such as Carbon Market Watch, Food and Water Watch International and ProVeg International, just to name a few (full list can be found here). This was no easy task and required a lot of negotiation and diplomacy in order to agree on the final wording of the policy proposal (I can only imagine how difficult it must be to do this on a much larger scale within the IPCC) but, in the end, we came out with a clear and strongly-worded policy proposal we were all happy with and inspired to push for adoption by the UNFCCC.

Not in my wildest dreams did I ever think that we would hold a press conference at UNFCCC international climate talks, but that is exactly what went down. I went to a press conference held by WWF about rapid climate action as I wanted to see how that would square with their oxymoronic ‘Sustainable Beef’ campaign but, after being denied this opportunity by them only offering space for one single audience question, I found out from the press conference manager, Marcello, that there were still press conference time slots left. So I got booking and managed to snag a 9am spot on Tuesday the 14th of November. It was unfortunately early, but it was the latest option available, with the only other options being a dreary 8am or 8:30am slot. We were pumped – we were officially on the schedule. Naomi, Alice and I started pitching our press conference to journalists from the likes of The Guardian, The Independent and Democracy Now. However, our press expert advisor, Biba Hartigan, reminded us that press obligations and opportunities are so ubiquitous at these conferences that we would be lucky to get a single journalist to turn up, so we brought our expectations down to earth (but not our efforts – we were going to have it well attended or die trying!).

I frantically prepared the presentation and worked with David Zwolski and the team to prepare the PCOP website, resulting in many late nights and early mornings outside of the gruelling 8am to 9pm COP23 schedule and managed to get it finalised in time for the big day. Naomi managed to get Cornell University’s Dr Robert Howarth to join me in presenting at the press conference which gave it the scientific legitimacy it needed since I, myself, am not a scientist. Although initially we were joined by our friends Caroline Wembley from Brighter Green and Erin Briehl from the John Hopkins Centre for a Livable Future, as the press conference progressed, we found more and more people trickling in which was exciting to see. Apart from the few little Freudian slips here and there (forgive me, I’m only human!) I think the press conference went really well.  As you will see from the official video recording of the press conference we had some really interesting questions from the audience afterwards albeit no subsequent media mention.

The next step was to pitch the policy proposal to the country delegations, so Naomi and I got knocking on doors. We knew the negotiators were busy negotiating (believe me, the negotiation sessions were LONG!) but we figured we could at least leave it at their reception to be passed on to them upon their return. On some occasions we were able to meet the negotiators right there and then to present our proposal, such as Ivory Coast and Nigeria, however most of the time we were not so lucky. But these meetings did prove fruitful, as the Nigerian delegation recommended we save time by meeting with the key negotiators of the major negotiating blocs of countries. Turns out that many of the countries, especially those with weaker bargaining powers such as ‘developing’ countries, would band together and gain strength in numbers. So this was our next strategy.

Naomi and I observed the daily schedules like hawks for these coveted meetings of the negotiating blocks such as Alliance for Small Island States (AOSIS), the European Union and the Least Developed Countries (LDF) just to name a few. We actually had some luck with AOSIS and the EU who gave us some great advice on how to move forward with our policy proposal between now and the COP intersessional in May 2018 and COP24 in Poland late 2018, where the rule-book will be finalised and our window for this policy proposal will close.

So there you have it – I’ve shared with you the story of how we built and launched the Put Climate On Pause Coalition at COP23 in the midst of the activity going on at the conference that I’ve barely touched upon here. Some other personal highlights during this conference included being interviewed by BBC Radio 4 program Costing the Earth as well as the official UNFCCC Climate Action Studio, meeting one of my inspirations and the founder of the Eat Forum – Dr Gunhild Stordalen, who is one of the few scientists not afraid to remind us of the true urgency of our climate crisis, Kevin Anderson and lastly my childhood action hero, Arnold Schwarzenegger, who reminds us that real change happens at the grassroots level. Now we have a goal and a timeline so if you know of any scientists or NGOs who may be interested in supporting PCOP please do get in touch.